As we can see from this previous article a router is the device responsible for routing packets between different networks. We have already covered that a router holds 2 types of routes in its routing table: Static and Dynamic.

Static is the manual method of adding routes to the routing table, but what about if you have a large corporate network this method was unmanageable? In this case you will require something that can update the routing table dynamically. 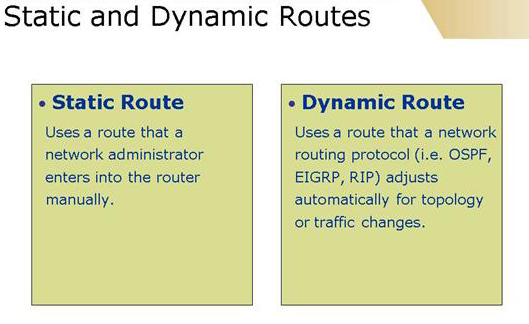 Can you imagine having a large infrastructure with over ten different networks, each one would need static route information added to each one of your routers. What about if the networks were changed often? This information would need to be setup initially then continually amended as changes happen. Consider for a moment if one of your routers was not operational, what would happen in your business, would your networks still connect, would your business still be able to function effectively? In a very small network with a maximum of 2-3 networks this procedure is fine, however as the networks expand you can easily get confused with the when it comes to routing.

So, in order to avoid all the mess and the downtime associated with misconfiguration on your network you will need to employ something that will automatically add this network routing information to your devices, this is where dynamic routing comes into play.

One of these protocols is what’s known as a RIP (Routing Information Protocol). RIP is a distance vector protocol; it is from one of the earliest dynamic routing protocols.

There are 2 versions of RIP, Version 1 and version 2. Version 1 is what is called a classful protocol while version 2 is considered to be a classless protocol.

RIP is a routing protocol. It exchanges network information between the routers, and in order to exchange this information it uses a multicast address 224.0.0.9.

The routers are usually informed about directly connected networks and static.

When you have a network and you apply a RIP protocol, it advertises the route every 30 seconds to show if something has changed or remained constant regarding all connected devices.

Before the update notification, the router is adding a metric (HOP), and the routing table contains the RIP with HOP’S (one HOP is one router away), while the maximum limit of HOP’s is 15. A HOP of 16 and above is considered unreachable.

Below is an example of how a RIP works:

RIPs can save users a lot of time and keep the network structure up to date with dynamic information that it sends to the entire network instead of using statically (manual) added routes.