QoS – Quality of Service, what is it & how does it help us online?

Home / Resources / QoS – Quality of Service, what is it & how does it help us online?

Imagine: it’s a wonderful morning and you are driving your car on the way to work, you naturally reduce your speed once you come across traffic because of approaching traffic lights, or worse, because of an accident. When you hear the ambulance sound, what do you do? As per the Highway Code you must pull your car to the side of the road in order to allow the ambulance to pass through; giving it priority because it is a matter of life or death.

In the networking world this is the same principle as Quality of Service. Yes, it can be found in computer world as well.

Not all services are the same in a network, there are people who surf the internet, there are people who listen to music; stream videos, play games online and there are people who use real time protocols such as Voip. This is needed to communicate between voip devices, well these kind of protocols need prioritisation because if you miss a packet perhaps you missed a word in a conversation, misunderstood the meaning of something or even worst lose the connection.

Here comes the QoS. Quality of Service gives priority to the services you set up based on your needs; you don’t want someone who merely surfs the internet to have the same priority as the Voip user.

Simple router devices offer QoS based on devices that are connected to them or based on the applications that are running on the devices via the router. This “old” QoS type is set by priority rules “Low”, “Medium” and “High” from the first one to be prioritised as very low to the third one to give high priority to the packet.

Now, more advance routers have the ability to offer the Wi-Fi Multimedia (WMM). WMM prioritises network traffic in categories as well. WMM is good but works only when the wireless network connections don’t work.

Let’s look at the highest priority to lowest:

Of course, the above priority can be changed depending on your individual needs.

Let’s see a different example of a gamer that sets his personal home router with different priorities: 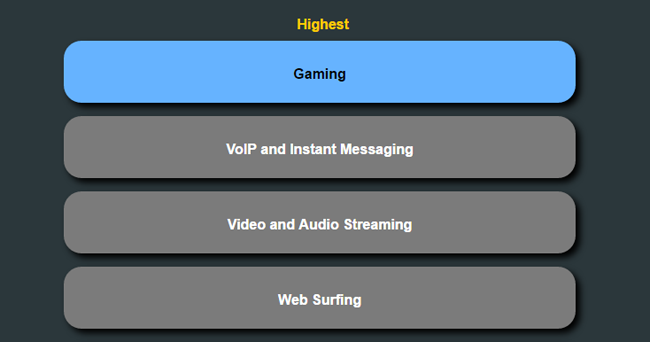 As you can see, he sets the gaming packets to have the highest priority (that helps to reduce lagging for online gaming), then he puts Voip packets as second priority, then video and audio streaming in third place and general web surfing in last place.

You can prioritise packets by service:

Or by device mac addresses: