When you are formatting an internal or external drive, USB drive or SD card on a windows computer, you have to choose either: NTFS or FAT32. Don’t choose randomly and hope for the best, let us explain some differences between the two options.

FAT32 is the older of the two formats. FAT32 is most common version of the FAT (File Allocation Table) file system created back in 1977 by Microsoft. FAT had been the standard format for floppy disks and hard drives throughout the DOS years, and versions of Windows up to and including Windows 8. 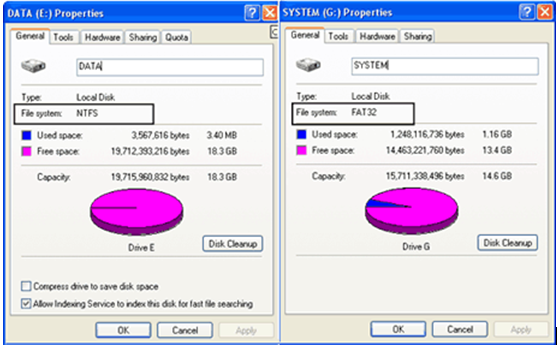 FAT32 is an older file system that’s largely relegated to USB flash drives and other external drives. Windows uses NTFS for its system drive, and it’s also ideal for other internal drives. exFAT is a modern replacement for FAT32.

NTFS, on the other hand, is fully read/write compatible with Windows from Windows NT 3.1 and Windows XP up to and including Windows 8. Mac OS X 10.3 and beyond have NFTS read capabilities, but writing to a NTFS volume requires a third party software utility NTFS for Mac. Look for NTFS-3G driver support on your Linux support page to see if it’s built in.

File Size
FAT32 file size support tops out at 4GB and volume size tops out at 2TB. This means that you’re limited to 2TB FAT32 partitions if you want to use a biggest drive. It also means that you are limited to 4GB files. Theoretically, NTFS is limited by design to 16EB (Exabytes). One Exabyte is the equivalent of one billion Gigabytes.